So Netflix was threatening to boycott the State of Georgia for its pro-life laws. Netflix is worried that Georgia will abort abortion. Because of this boycott threat, many pro-lifers are boycotting Netflix.

But Netflix is a hypocrite. It’s not really serious about abortion rights. Because if it were, it wouldn’t be streaming pro-life movies like I Am Mother. That’s right, Netflix actually streams a very pro-life, very anti-abortion movie. If Netflix doesn’t realize its contradictory stance, then it’s either simply hypocritical, or incredibly ignorant of its own content, or it’s secretly anti-abortion. I’m not sure what they are, but here are the pro-life signs from their recent critically acclaimed hit film itself:

So there we have it. Signs strongly suggesting that Netflix is flip-floppy about its abortion advocacy. Sure, boycott a pro-life state, but don’t boycott a pro-life movie streaming from your own collection? Come on. Just come out and say it: Netflix is secretly anti-abortion (or at least conflicted).

So I just spent approximately six hours of my life watching Infinity War and Endgame, and here are the most meaningful moments I noticed–mostly hinted in Infinity War, and fully displayed in its sequel.

At first I wanted to write more about this (hint: it has something to do with Pattie Mallette (Justin Bieber’s mother) and Beethoven and his mother, too… you know you wanna know!), but I’m not going to spoil it anymore for you. Just see for yourself (well worth your 15 minutes!):

And now read this article from Legatus Magazine to find out more.

[Yesterday, January 22nd was the 41st annual March for Life protesting against the legalized massacre of American children, motherhood, fatherhood, sisterhood and brotherhood. In honor and memory of the dead, may I share… Hand in the Sand:]

I thought I found a long lost sister, but it was only her hand. When I crouched down to touch her fingers, they were cold and wet and looked too red – like a steamed lobster.

My friend and I were at the river to skip stones. He said he knew how, but we quit after our arms got tired from trying. We started walking down along the sandy river bank, getting closer to the bridge, searching for more perfect stones while letting our throwing arms rest. That was when I found her hand.

At first I thought it was some kind of seaweed, or coral. I told my friend but he said people don’t even fish in the river, how could there be seaweed if there’s not even fish? I didn’t know the answer so I ignored him and picked up the red flesh. It fit completely into my left palm. It felt like the strawberry jelly I ate for lunch.

I realized it was a little hand when I saw its small outline mirror my thumb and fingers. My friend realized too and shouted, “Someone lost a hand!”

Not knowing what else to do, I held onto it and looked around the shore. City traffic was above our heads, cars making wind while they hurried over the steel bridge. My friend poked at the hand and pointed to the skinny blue strings inside. They looked like my blue strings, but mine were thicker.

A dead tree stuck its roots out into the river, maybe dead because the bridge hid the sun now. Caught in the tangle of roots was a clump of plastic bags. I wanted to use one to carry the hand home. My friend reached out to snatch a bag but it was filled and tied tight. He grabbed another one that was emptier and dumped the trash out. When he saw hands hit the sand, he dropped the bag and backed away. I couldn’t stop staring.

One time my dad took me to the hospital because my stomach hurt so much. Around my wrist, the nurse put a blue bracelet that had my name, birthday, and numbers I don’t remember anymore. I asked my dad if I could keep it because blue was my favorite color.

I couldn’t stop staring because blue was my favorite color, and there were so many bracelets. I crouched down to look at the bracelets, but they were around little legs. I thought the toes were fingers but now I could see, and I could see names, birthdays, and so many numbers.

The first word my parents ever taught me to write was my surname – Wu. They said it was important, and that anyone else with Wu was long lost family. I was just happy because Wu was easier to write than others.

So Wu was easy for me to recognize on the stained anklet. I found my friend’s name too and told him to come see, but he wouldn’t. He told me to stop touching the babies. I said why would anyone put babies in bags? They’re just hands and legs.

I put down the jelly hand and began to pull the blue anklets off the legs. Now I could finally start wearing mine and not worry about losing it.

After collecting four anklets – all clasped around my arm – I tugged the bag aside to see if there were more legs. I saw a butt and laughed.

“It’s a butt!” I said to my friend. I peeled the thick plastic away and noticed the words on the bag. I asked my friend if he knew what medical refuse meant, but when I looked up he was already running away. I looked back down and saw a pink face beside the pink butt. This time I didn’t laugh. I couldn’t even if it was somehow funny.

I covered the face with the bag and looked in the other bags for more anklets. Before I went home that day I had more than sixteen. I washed them in the river because I knew my mom didn’t like dirty things, but when I showed them to her she still said they were dirty and threw them all away – even the Wu one.

I went back to the river the next day to find more but the police told me to go home. They were busy cleaning up and digging around the dead tree. 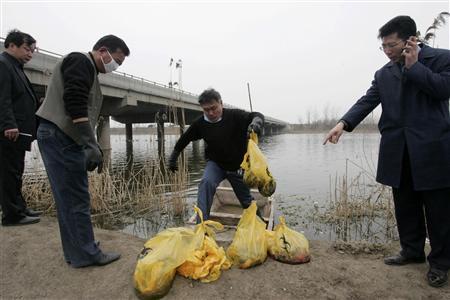